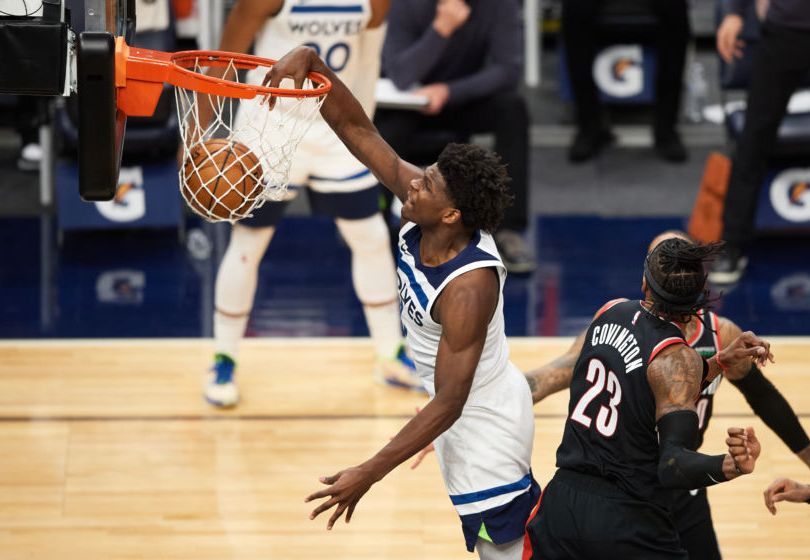 The 2020 rookie class was heralded as one of the weakest in the last 20 years. There were no clear cut future stars, and every prospect had at least one fatal flaw that would keep them from becoming and NBA superstar. Halfway through the season and it looks like most draft experts were super wrong about this class and deserve to be called out for their slander against bonafide future stars like LaMelo Ball, Anthony Edwards, and Tyrese Haliburton. 30-some odd games into this wonky season and the rookies have somehow outshined even the rosiest of projections, overcoming zero offseason, a limited training camp, and dealing with the chaos of the pandemic at tender ages. While it probably won’t go down as the greatest draft of all-time, the 2020 NBA Draft is definitely better than anyone could have ever imagined.

New Melo has been the leader in the clubhouse for this new, prestigious made up award all season. Leading into the 2020 NBA Draft Ball had plenty of detractors and it seemed to be a 50-50 chance he would either be the next Magic Johnson, or perhaps some version of Michael Carter-Williams. Either all-time great or all-time chump seemed to be the thought about Ball for months, and 30-something games into his career new Melo has exceeded even the loftiest of expectations for his rookie season. LaMelo is one of the most exciting players in the entire league, throwing lobs and skip passes all over the court to mediocre dudes like Miles Bridges and Malik Monk. He has the normally woeful Hornets in the 6th seed in the East and currently clear of the play in tournament. Ball looks like one of the next crop of great young players who will be one of the best players in the NBA for the next 15 years.

It took a while but the first-overall pick in the NBA draft is finally showing critics that perhaps the Timberwolves actually knew what they were doing when they selected Edwards ahead of Ball and James Wiseman. The 19-year-old from Georgia looked like he was in way over his head in the truncated pre-season, and a lot of his struggles plagued him throughout the first half of the regular season. Edwards struggles to make shots and is shaky from three, but holy shit is he an athletic terrorist when he gets a head of steam going to the rim. He threw down what will easily be the dunk of the year against the Raptors, and has a dozen other insane highlights across his first 36 games. In the eight games since Chris Finch took over as head coach Edwards is averaging 22 points per game, 5.9 rebounds, and 2.5 assists on shooting splits of 39.6/31.9/82.1. Edwards is well on his way to becoming one of the most popular young players in the NBA and has started to show that he can actually help the Timberwolves win some more games.

Haliburton has been as steady as a 10-year vet all while playing on the least steady team in the NBA (friggin Kangz). The 21-year-old shooting guard has shown the ability to knockdown any shot and is hitting a blistering 43 percent from three as a rookie. Haliburton is already an above average playmaker with 5.2 assists as a nice compliment to De’Aaron Fox. Some people think Haliburton’s ceiling may be a little bit lower than Ball, Edwards, and even Wiseman, but he already has show an incredibly high floor in which to improve upon. Now just get as far away from Sacramento as possible, Haliburton sure would look great in a Spurs jersey wouldn’t he?

The Knicks knocked the 2020 draft out of the park, but surprisingly not for their top pick. The Knickerbockers chose Dayton phenom Obi Toppin with the 8th pick in the draft, but it’s their 25th pick Quickley that has helped steer the Knicks back to relevance. Quickley is already showing flashes of becoming the next Lou Williams/Jamal Crawford type slasher scorer who already has one of the best floaters in the game. Julius Randle, R.J. Barrett, and Quickley are the wonky, talented young core that against all odds will be the saviors of Madison Square Garden.

The Bulls are back and a lot of it is thanks to their young core, of which Patrick Williams is a key cog in the machine. Williams is a perfect fit in the frontcourt alongside Wendell Carter Jr., Lauri Markkanen, and Thaddeus Young. While Williams probably doesn’t have a future as an NBA superstar, he has the tools to grow into an important role player on a perennial playoff team.

One of the lone bright spots for a Pistons team that once again is the most boring team in the NBA. Killian Hayes was supposed to be the top rookie in the Motor City, but since his injury Bey has taken that title. Bey is a nice sized wing who can knock down a three and give the Pistons a boost off the bench.

Undrafted Tate has come out of nowhere to find himself in a solid rotation spot with the Rockets in the aftermath of the James Harden trade. Tate fills a lot of needs for the Rockets who have lost 16 straight games. Tate rebounds extremely well for a 6’4″ small forward and cam provide a little defense, something James Harden never did.

The plight of James Wiseman over the last 18 months makes the 19-year-old seven-footer the most interesting rookie in the NBA. Wiseman was the presumptive favorite to be the top pick in 2020 until he was barred from playing for Memphis after three games for improper benefits given to Wiseman’s family. Nobody saw him play basketball for a year afterwards, causing his draft stock to drop with pundits unsure of his talent level. Eventually Wiseman was taken second by the Warriors, a team with a roster full of key members of the Warriors dynasty that won three championships. Adding a talented big man in Wiseman was a gamble for Golden State, how would he fit in with Steph Curry and Klay Thompson? The answer is we still don’t know since Thompson is out with an Achilles injury. Wiseman has had an up-and-down rookie year moving in and out of the starting lineup, while facing criticism from head coach Steve Kerr. Wiseman still looks like he’ll be able to blossom into a good Center in the NBA, but his path to stardom has gotten just a little bit more difficult than we originally thought.

Bane gives the Grizzlies yet another young player to mix in with budding superstars Ja Morant and Jaren Jackson. At 45.1 percent, Bane is already one of the best long range shooters in the NBA and will fill an important role off the bench for a Grizzlies team fighting for a playoff spot.

Giving the Pistons some big beef in the middle, Stewart has been a lot of fun to watch on the lowly Pistons. Stewart is a tough guy who will be a fan favorite in Detroit for years to come.